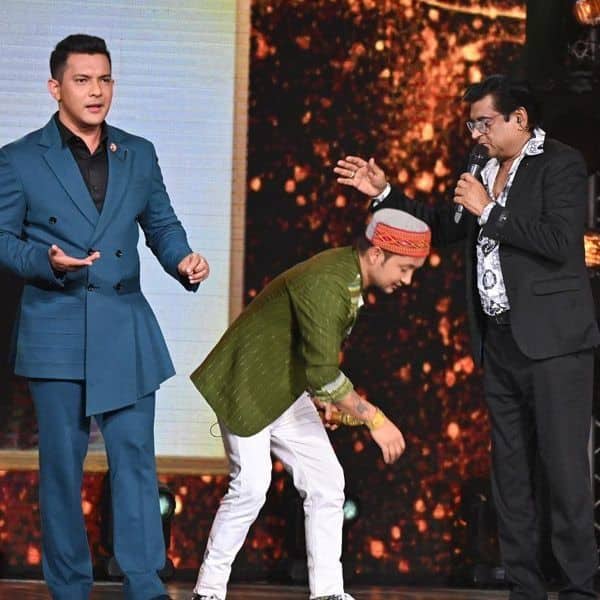 Indian Idol 12 has a massive fan following. The show has been going on well and fans are totally loving it. This year the contestants are giving each other tough fight and it has become impossible to know who would be the winner of the show. This week on Indian Idol 12, the contestants and the judges will celebrate legendary singer Kishore Kumar. They will sing a total of 100 songs of Kishore Kumar. Kishore Kumar’s son, Amit Kumar Ganguly was the special guest of this amazing episode. We bring to you the best moments from the show.

During the episode, after some performances, we had the judges, host Aditya and Amit Kumar Ganguly singing all Kishore Kumar’s song from the word Zindagi. This was a beautiful moments which made us all wish Kishore Kumar was alive to watch this.

Pawandeep Rajan who joined the show last week got the arrived guest’s watch as a present. The Pahadi boy impressed Amit Kumat by performing outstandingly on “Dilbar Mere” and “Mere Dil Me Aaj Kya Hai” and “Kora Kagaj Tha Man Mera”. The singer couldn’t resist gifting Pawandeep his watch and stated that it was gifted to him by his father.

Mohammad Danish impressed everyone with his performance and Amit Kumar gave him the title of Don. He even sang the Don title song for Danish and it was a beautiful moment.

Shanmukhapriya brought in an amazing energy in the show with her energetic voice. Her songs left everyone surprised especially guest, Amit Kumar.

Sawani Bhatt performed on Khaike Pan Banaras wala from the movie Don. His singing made everyone get up and dance. Even Amit Kumar could not …read more