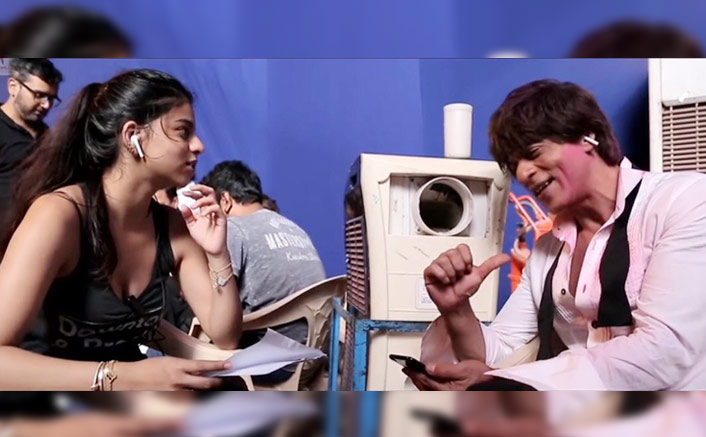 King Khan of Bollywood, Shah Rukh Khan, who has wooed us over the years, is all set to charm us yet again but in a different avatar this time. SRK is all set to come on the big screen with Zero on December 21, 2018. Directed by Aanand L Rai, it also stars Anushka Sharma and Katrina Kaif in the pivotal roles.

Recently, Khan’s daughter was clicked on the sets of Zero while shooting for the song Mere Naam Tu. The song has garnered a lot of appreciation from the audiences. In the making video of the song, we got a glimpse of Suhana who was seen assisting her father on the sets.

Yesterday, we met the Dilwale actor where revealed about her daughter’s presence on the sets. When he was asked if Suhana is gearing up for a Bollywood release anytime soon, Khan said, “She wants to act but she needs to train in that for 3-4 years. She did some plays in London now and hopefully, she will shift to America. She came on the sets as part of learning because a part of the process of learning acting is to spend time on production. So, I think she did some in London. She was here and was sitting so she said she wants to visit some sets and learn and we were shooting for that song for two weeks, so she came and I wanted her to come to experience it.”

Charlize Theron on The Old Guard: I wanted something sci-fi that still felt relatable

Bollywood News WebRSS - July 11, 2020
0
Arjun Kapoor and Malaika Arora made their relationship official last year with an Instagram post. The duo has been giving us major couple goals...

The Old Guard movie review: Charlize Theron is back in beast...